Have you ever heard of Korokke (コロッケ)? It’s similar to croquette, and kroket in Dutch. I even saw them being sold in a vending machine in Holland. I bought one but don’t remember what it tasted like, or whether it was similar to the Japanese Korokke. 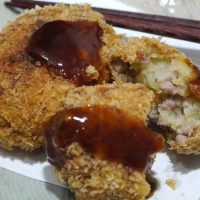 The most basic form consists of mashed potato and minced pork. Another Korokke is cream-Korokke, made with crab or chicken and a thick bechamel sauce.

When you fry it in oil, you have to watch it carefully all the time! Here are several tips for making it.