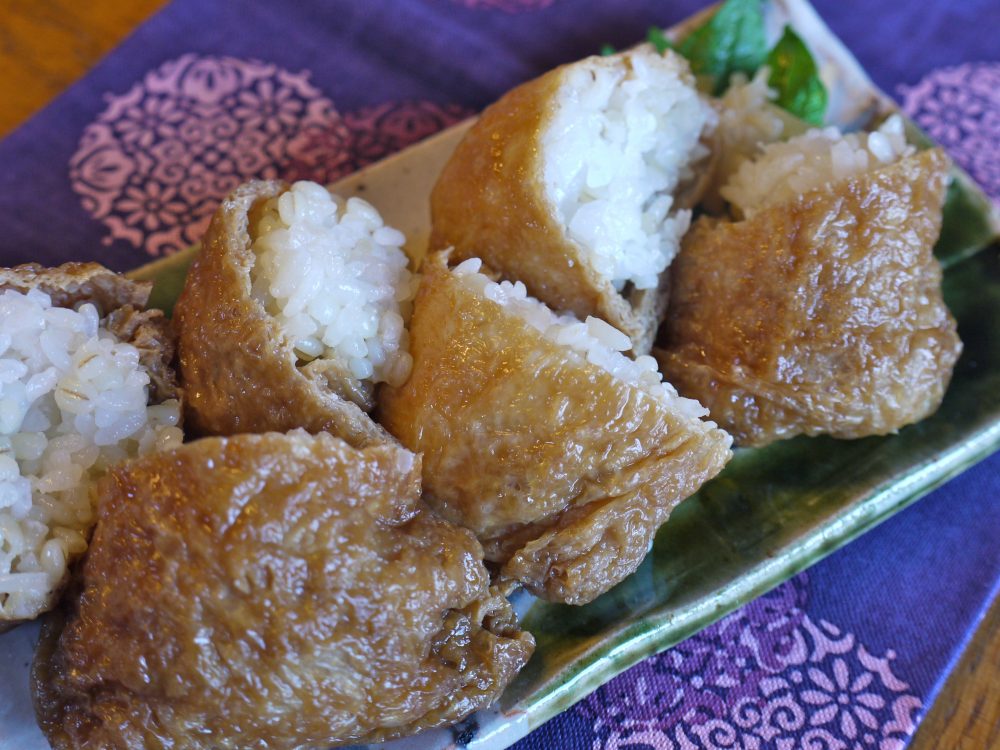 Inari sushi (稲荷寿司:いなりずし) is one type of sushi. There are many different “Inari sushi” recipes depending on which part of Japan you come from. This recipe is a very plain and basic one using sushi rice, called sumeshi in Japan, (sumeshi: 酢飯:すめし) and aburaage (油揚げ:あぶらあげ:Aburaage by wikipedia). This “Inari sushi” is a very popular and common sushi besides the more well known Nigiri(握り:にぎり) and Maki(巻き:まき) sushis.

What is aburaage (油揚げ:あぶらあげ)? It’s deep fried tofu. We normally buy it ready made from a shop. Because the only ingredients are soy beans and vegetable oil, a Japanese vegetarian food called shojinryouri (精進料理:しょうじんりょうり), eaten in temples, often uses aburaage as a source of protein. 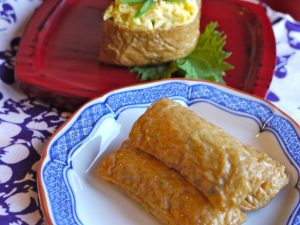 This recipe is a very basic version. Most simple inari sushi do not contain any meat or fish, only “aburaage” and “sumeshi (vinegar flavoured rice)”. The aburaage “envelope” can be closed or open at the top. I decorate it with thinly sliced egg (=錦糸卵:kinshi tamago) and green beans. You can create your own Inari sushi with your favourite topping. 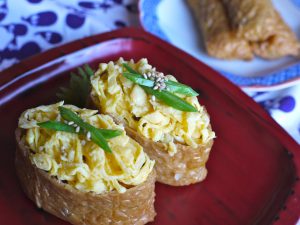 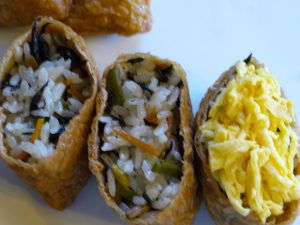 I have written “Inari sushi”, but it is more correctly pronounced “Inari zushi(いなり寿司:いなりずし)”. The pronunciation changes depending on the characters used and the order they are in. There must be some rules, but I never think about it.

As I mentioned, there is a variety of “Inari sushi”. This recipe is very simple. My mother’s recipe is not only with “sumeshi”, it adds some cooked, slightly flavoured vegetables. The photo shows inari sushi with carrot, green beans, sesame, and hijiki (ひじき), a Japanese seaweed. Because I grew up with mother’s “Inari sushi”, I do prefer it. The first time I had this simple, plain “Inari sushi”, I thought it was a corner cutting job! Then I discovered it was more normal. Which one is popular among my family? It seems they prefer my mother’s recipe. It takes more time than the simple one, but it’s wonderful thing that my mother’s recipe will carry (hope they make it!) to the next generation outside of Japan. Don’t you think?